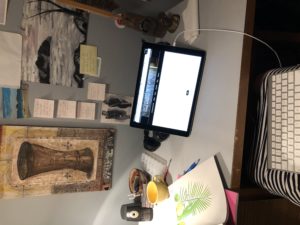 My process is layered, layering. I build my work from flat bits of cardboard that, with the help of masking tape and glue, become a structure, a rock, a wall medallion, a house, a cave. I use newspaper and wheat paste and recently plaster. I am interested in creating works that feel discovered, like they were always there but behind something, under something, recently brought to light.

I am working in series format, I can’t just make one of something, just one is not a full thought, a full idea, it is just one word and I want to create sentences.

“There is a vitality, a life force, a quickening that is translated through you into action, and there is only one of you in all time, this expression is unique, and if you block it, it will never exist through any other medium; and be lost. The world will not have it. It is not your business to determine how good it is, not how it compares with other expression. It is your business to keep it yours clearly and directly, to keep the channel open. You do not even have to believe in yourself or your work. You have to keep open and aware directly to the urges that motivate you. Keep the channel open. No artist is pleased. There is no satisfaction whatever at any time. There is on a queer, divine dissatisfaction, a blessed unrest that keeps us marching and makes us more alive than the others.”― Martha Graham

—”an oval or circular painting, panel, or design used to decorate a building or textile.”

I began this as an accident. I had made an oversized vessel that ended up looking like a trash can and I had the idea that if I made a top for it, it would look less like a trash can — more like a vessel.  No, it did not.

And so naturally, I added a woman’s head to the trashcan lid! Then when a curator visited my studio, she called it a frieze and she liked it, allowing me to like it —for what it was, no longer a trashcan lid, now a frieze.

And now there are three with one more in production. All of these medallions will address the female form, actually, bits and pieces of the female body.  Breasts, hair, brains, hands, and more.